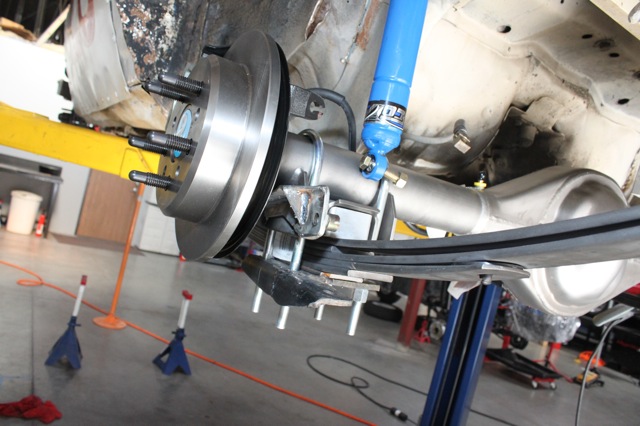 A broken weld made a dirt modified with leaf spring suspension mysteriously faster. Some Illinois racers noticed the difference, figured out why the broken suspension worked better, and the results now frequently annoy the heck out of drivers who use expensive, sophisticated 3- and 4-bar suspensions.

“What happened was the weld that held the right rear leaf (spring) in place on the axle housing broke, and the right rear axle housing was rotating when they got into the throttle,” says Robert Crump, RC Racecars, Peoria, Illinois (www.rcracecars.net 309-673-3055) and originator of FastBoys leaf spring components. “That floated the right rear suspension, gave it a little rear steer, but mostly it made the left leaf spring into a torque arm that forced the left tire into the track. Scott Mays and some of the other guys figured out that if they use the right rear leaf spring just to locate the axle under the car, and let the axle float on that side, that their cars could be really quick. Some guys used a pipe-type mount to float their right rear, but those seem to bind up at some point. We use a roller bearing mount to make sure the right rear stays free. The right leaf doesn’t really carry any weight—we use a coil spring for that. The leaf locates the body and controls rear steer, while the left leaf spring is driving its tire into the track as a torque arm. The combination can work really, really good. ”

Randy Harrison, president of RaceMart, Memphis, Missouri, ( HYPERLINK “http://www.randys-racemart.com” www.randys-racemart.com 660-465-2069) says the concept of floating the right rear on leaf spring suspensions has been around for more than 15 years, but innovations and improved components have made the old concept new again. “There are two or three basic setups which are really simple, compared to bar car setups. We run a monoleaf on the right and a stacked leaf on the left. What really makes the setup work is precise shackle angles, the angle that you mount the shocks, and keeping that right rear free-moving.”

Crump says the key that allows leaf spring drivers like Gary Cook, Jr. (Top 5 in 2007 UMP points) to annoy drivers of 4-bar cars is attention to detail. “Everybody knows that 3- and 4-bar cars take lots of attention and lots of maintenance if you want them to be fast. So they’re willing to spend hours and hours, and lots of money, to make that bar car work. If a guy makes the same effort to install a leaf setup correctly, and learns how to work with it and adjust it for track conditions, I think the leaf setup is just as fast and doesn’t take as much money or time between races to stay competitive.

“(Leaf suspensions) have a reputation for being really good on heavy or rough tracks because they don’t get upset when they grab traction or hit a hole like a bar car,” says Crump. “But if you really understand a leaf setup and take time to make it work, I’ve seen leaf cars that hook up on a dry slick track just as well as the fanciest, most expensive 4-bar car. If you’ve got those shackle and shock mounting angles right, a leaf car will hook up and pull it’s left front tire in the air like the bar cars. In fact, I’ve seen leaf cars that hook up so hard they twist and break the rear axle tube.”

Randy, with RaceMart, concedes that bar cars make up the majority of his business. “But I’m just not sure that 4-bar suspensions are really that much faster than leaf cars, if a guy puts as much time and energy into setting up the leaf car as he does a bar car.”