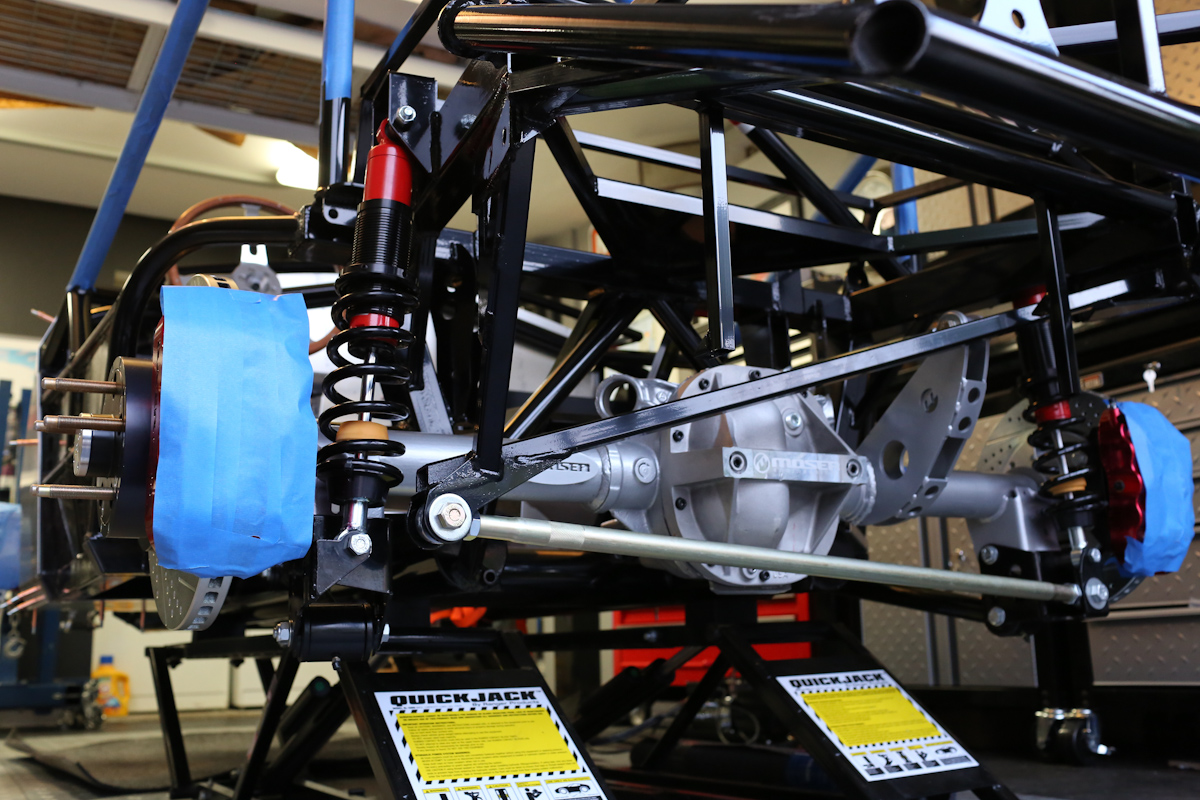 Pit reporters often refer to teams “putting a round of bite in the left rear,” or making “track bar adjustments.” So what exactly do those terms mean?

The first one is simple: It means that the team has tightened the spring jacking bolt at the left rear suspension one turn. That forces the left rear tire down harder against the track, increasing its traction and thus reducing oversteer. (Tightening the right rear jacking bolt has the opposite effect – it loosens the car.)

The second term is more complicated.

Track bars, more correctly called panhard bars, are designed to locate a solid axle side to side, or laterally. (We’re confining our discussion to rear panhard bars.) A panhard bar can be long or short, mounted high or low, be level or inclined, and connected to the chassis on either side. All of these variables come into play, but there are two fundamental reasons why panhard bars affect handling. The first is that they locate the rear roll center.

A roll center is an imaginary point where the application of a sideward force will not cause the chassis to roll. Both the front and rear suspensions have their own roll centers, which are determined by suspension geometry. In a side view, both roll centers are in vertical planes passing through the respective spindles (Figure 1).

An imaginary line called the roll axis connects the front and rear roll centers. A turning car experiences a radially outward centrifugal force at its center of gravity, which tries to roll the chassis around the roll axis.

The centrifugal force also transfers weight from the inside tires to the outside tires. Along with other variables, the relative heights of the front and rear roll centers affect the front-to-rear distribution of the car’s roll stiffness and thus the distribution of the transferred weight. The end with the greatest roll stiffness will receive the largest percentage of the transferred weight, and will tend to lose side bite first.

Figure 2 illustrates the simplest use of a panhard bar and is representative of a Cup car installation. The accompanying photo of the underside of a Car of Tomorrow shows a typical panhard bar mounting. NASCAR rules require that the bar be at least 42 inches long, bolt to the back of the left trailing truck arm at a minimum height, and connect to the right side frame rail at a particular location. The right rear anchorage point can be moved vertically with a jacking bolt during a pit stop.

Panhard bars can also push and pull the rear end sideways as the suspension deflects, especially short panhard bars. Lateral rear axle movement generally causes rear end skewing, which results in rear roll steer. If the rear’s skewing increases the right-side wheelbase with respect to the left, the car will have roll-over steer. The opposite is also true.

The amount and direction of the lateral axle motion depend on several factors. Shorter panhard bars translate the rear more than longer ones, and inclined bars further increase the amount of axle movement if their inclination increases as the chassis rolls. For example, a short panhard bar connected on the left and inclined downward toward its attachment at the rear axle will pull the rear axle toward the car’s left side quite a bit as the car rolls right. This is common on dirt race cars. The panhard bar controls the amount of lateral axle motion, and the geometry of the other suspension links determines how much the rear axle skews.

In this example, raising the panhard bar where it connects to the chassis will increase the amount that it pulls the axle to the left as the car rolls. With most dirt suspensions, this adjustment will increase roll oversteer, loosening the chassis up in the turns. The opposite is also true.

Inclined panhard bars also produce vertical forces that act on the car’s chassis and the rear axle at the bar’s attachment points. This is the second fundamental reason that panhard bars affect a car’s handling.

When a panhard bar is level, the rear tires’ entire lateral grip is transferred into the chassis at the bar’s end horizontally. But if the bar is inclined upward to the left, as in Figure 3, the forces transmitted into the chassis will have two components – one horizontal and another vertical (and up).

In this example, the panhard bar contributes to chassis roll because it pushes up at the car’s left rear. There will also be an equal but opposite force pushing straight down on the axle where the bar connects to it. These opposing vertical forces increase as the inclination of the panhard bar increases, especially with larger angles.

If the bar is connected on the right and inclined upward to the right, it will pull the chassis down on the right side, but it will also unload the axle with a vertical force up, where it connects to the axle.

With inclined panhard bars – and all bars incline at least a little as they swing through their arcs – the point where the bar connects to the rear axle is important. If it’s at the center, its vertical force will be equally divided between the two rear tires. If it’s to the right, proportionately more of the vertical force will go to the right rear tire. The J-bars commonly used on dirt race cars are generally mounted to the right of the axle’s centerline and inclined upward toward their left chassis mount. That sends more downward vertical load to the right rear as the car turns. (Incidentally, J-bars are mechanically equivalent to straight panhard bars having the same length from bearing center to bearing center. Their characteristic shape simply provides driveshaft clearance.)

Clearance is generally the main consideration when deciding to mount the panhard bar ahead of or behind the rear axle. The performance characteristics are similar, except when springs and/or shock torque absorbers are used on the end of the torque arm, because they allow the axle to rotate about its centerline, moving the bar’s mounting point up and down under acceleration/deceleration. (The direction of the roll center movement due to the axle twisting will reverse when the bar is moved from the front to the rear.) As with the other variables affecting the rear roll center height, moving the roll center up will increase rear roll stiffness and thus loosens the car up.

Panhard bars look simple, but using them can be complicated. For most racers, it is best to start with the chassis manufacturer’s recommendations.