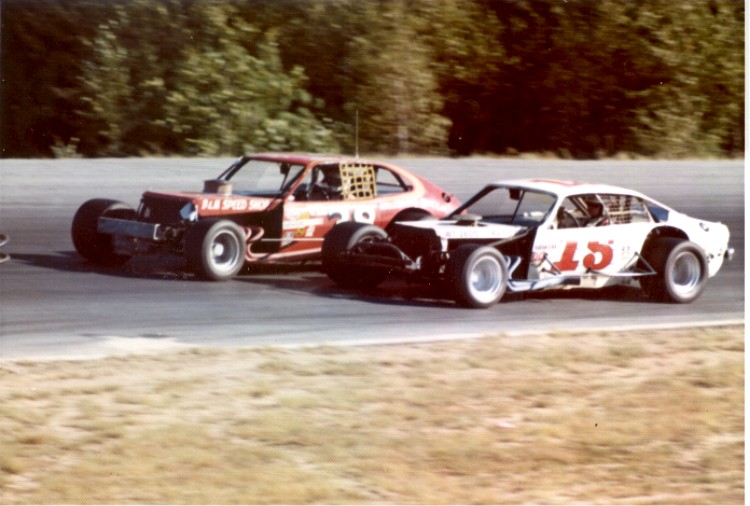 The fascinating autobiography BUGSY!, co-written by three-time NASCAR modified champion Bugs Stevens and Speedway Illustrated contributor Bones Bourcier, devotes an entire chapter to the increasingly rare art of racing etiquette. Stevens, who won literally from Maine to Florida on tracks ranging from quarter-mile bullrings to the old Trenton Fairgrounds mile, charged hard enough to capture over 300 features, yet retired with a sterling reputation for clean, fair driving. With gratitude to the publisher, Coastal 181, we present the following excerpt as a nod to drivers everywhere who rely on talent, restraint, and respect. To them we say: Thanks, you don’t hear it often enough. As for the rest? Well …

If you want to judge this sport by the level of the competition on the track, I don’t think short-track racing has ever been any better than it was in the 1970s and ‘80s. And when I talk about the competition, I don’t mean the difference in the lap times between the fast guys and slow guys; I mean, the quality of the racing.

I don’t want to sound like an old fart, but there was a higher level of driving back then. I’m positive about that. Now, I’m not saying we were better drivers than these guys today. But I do think we were better racers. And I think that’s true right from the top of the sport down to the local level.

In the past fifteen years or so, I’ve seen a real lack of discipline start to creep into the sport. It gets worse with every new crop of young drivers. Honestly, I think it’s brought on by what they see on TV; they watch those big-league drivers get away with all kinds of bumping and slamming, so they figure it’s all right to do the same thing.

Well, it’s not all right with me.

In my day, we were taught to out-drive the other guy, not out-bang him. We were taught that you passed another driver fair and square, or you didn’t pass him at all. Obviously, a lot of drivers today don’t have that same attitude. Look how many times over the past few years we’ve seen Sprint Cup and Nationwide Series races on television where one guy just knocked the other guy out of the groove to pass him. Look how many times we’ve seen the leader get nudged out of the way in the last couple of laps, or get spun out altogether. Then the winner stands there in victory lane and says, “Well, I did what I had to do.”

Well, that’s not true. He didn’t do what he had to do, he did what he wanted to do. He wanted to win that race at any cost, damn the other guy. That sort of thing has gotten so common that whenever it happens, people say, “Hey, that’s racing.” But it’s not racing to me. It’s stupidity.

You’re supposed to pass the other car, not knock it out of the way. These are races, not demolition derbies. And these are race cars, not dodge-‘em cars at the carnival.

I raced modifieds three or four nights a week for 25 years, and I can’t remember a half-dozen races in all that time when one driver took out another—I mean, blatantly moved him out of the way—to win the race. It just didn’t happen. Sure, in the early stages of a race or in the middle laps, there were times when you might get a bit physical if a guy was blocking you, really running you around. But if it came down to the last couple of laps and none of your best moves was good enough to get past the leader, you settled for second and told yourself you’d get him tomorrow night. You might not have been happy finishing second, but at least you were satisfied in knowing that you had taken your best shot. For us, that was good enough.

You know what it all comes down to? We had a higher degree of respect than these kids today. I mean, respect for our equipment, respect for one another, and especially respect for the ethics of driving. We cared more about that stuff. There’s no question about that.

For years and years, race drivers lived by a set of unwritten rules. The best drivers, I think, still follow them. They’re pretty simple, really. If you’re faster than the guy ahead of you and you’re trying to take his position, you’ve got to have your front wheel beside his cockpit, where you know he can see you. If you’re not up that far, he owns the groove; he’s got the right of way. But once you do get up to his cockpit, you expect that guy to realize that you’re there, and it’s up to him to give way. You’ve got the line. It’s a give-and-take thing.

You apply that same basic theory when you’re in his position, with a faster car behind you. You’re the boss when you’re in front, and you’ve got a right to defend your turf. But once that faster car gets a wheel on you, you’ve got to surrender the line. That doesn’t mean you have to surrender the spot; you can still fight as hard as you want to in whatever lane you’ve got left. But the groove now belongs to the other guy. He earned it.

Nobody knows for sure where these rules got started, but those general rules applied wherever you raced, and whatever you raced. They were the law, at least in my eyes. If a guy got a wheel under me, I surrendered the line. If I had a wheel on him, I expected the same treatment. It made for great racing, fair racing.

I don’t know what happened to that philosophy. You watch a Cup race, and those guys talk like it’s okay to beat and bang one another. And it’s not just the Cup guys; even the weekly racers are rougher than ever.

Don’t get me wrong, I’ve been in my share of tough races. I ran races at some of the bullrings where it seemed like all night long we’d be clanging into each other, but it was all just accidental stuff, the kind of thing you get on tight tracks: one guy lifts, the next guy doesn’t, and you have a little chain-reaction bumping. But it sure wasn’t intentional. It sure wasn’t expected. And it sure wasn’t accepted.

When I think about the best racing I’ve ever done, I don’t necessarily think about winning. I think about the nights I ran side-by-side, lap after lap, with guys who felt the same way about fairness that I did. And there were an awful lot of drivers like that. Depending on the track, it might have been me and Ronnie Bouchard, me and Fred DeSarro, me and George Summers, me and Eddie Flemke, or me and Richie Evans.

I enjoyed all those races, even the ones I lost, because of the way we treated each other. We never even came close to touching, unless one guy made an honest mistake.

I’ll tell you how much things have changed. There was a time when the writers would refer to me as an “aggressive” driver, because I always charged to the front. They said the same thing about Bouchard, Freddy, Richie, a lot of us. Well, when anybody today uses that term —aggressive—what they really mean is that the guy makes a lot of contact.

Think about it: Every time the television people talk about Dale Earnhardt having been aggressive, they don’t show him passing cars; they show him running into somebody. And that’s a shame. Earnhardt had an amazing amount of talent, but what he’s remembered for is roughing up the other guy. In a way, he helped make all of that seem okay to these younger drivers. They saw Earnhardt get away with it for years, so they figure it’s acceptable. In my mind, excess contact is not acceptable. Even the worst driver can run into another car.

As much as I holler about all this, I’m not sure it’s a problem that can be solved. Now that’s it’s gotten this far out of hand, it’d be awfully tough to get racing back to the way it was.

Maybe it all comes down to basic training. I believe that if every young kid learned by driving quarter-midgets instead of by watching those Cup guys run into each other on television, they’d be better drivers in the long run. Cleaner drivers. Because, see, in an open-wheel car you learn that there are consequences to sloppy driving. You learn that if you don’t race with the proper respect, you’re liable to take a bad ride.

Then again, maybe the reasons for all this rough stuff go beyond racing. I mean, society in general is different than it used to be. My generation was brought up to respect so many different things: our parents, other people’s property, money, you name it. What do these kids respect today?

I know what a lot of them don’t respect, when it comes to racing: all those old unwritten rules. That shows up every weekend, whether you’re watching a Cup race or sitting in the grandstands at some short track. They’ll chop the guy on the inside, they’ll spin the other guy out as soon as they can get to his bumper, they’ll knock the leader out of the way if that’s what it takes. And they won’t feel the least bit sorry about it.

I’m telling you, I’d be in a lot of trouble if I raced against some of these guys. I’d wake up every Monday morning with sore knuckles.