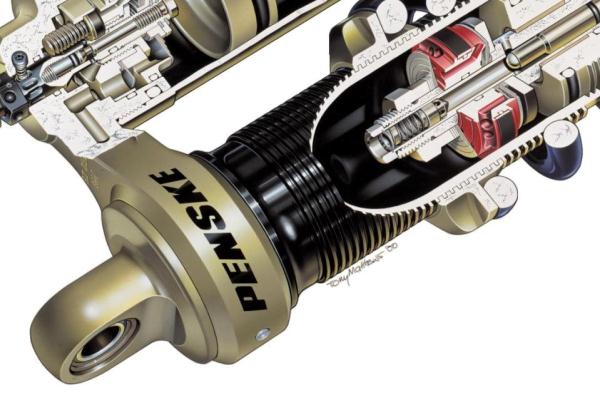 The amount of dampening force produced by a hydraulic shock absorber depends on the speed the shock’s shaft/piston is moving and the valving within the shock. The faster oil is forced through the orifices and valves, the greater the resistance to motion and the greater the damping force.

Most racing shock manufacturers use a simple numbering system to identify the valves, and thus the dampening forces, of their shocks. They assign a number to represent the compression dampening and a second number to represent the rebound dampening. The larger the number, the stiffer the shock. Other numbers indicating the shock’s design characteristics and its stroke are also used.

We obtained a steel body, non-adjustable shock identified as a six compression and three rebound shock from five manufacturers. Roehrig Engineering tested the shocks on the same high-end dyno in the same way. Their drastically different dampening forces are due to differences in the shocks. We overlaid them for direct comparison.

In the low speed compression range, a critical area for car handling during chassis rolling and pitching, the stiffest shock has over four times the dampening force as the weakest shock at two inches per second, and at four inches per second it has three times the force. Notice that in this low speed range some shocks were progressive, others were nearly linear and one changed from progressive to digressive. At the higher compression piston speeds produced by bumps, all but one shock was digressive. At ten inches per second all five shocks have compression dampening forces that are within 30 % of each other.

The only way to compare one manufacturer’s shocks to another‘s is to obtain the respective shock dyno sheets. The value of working with one shock manufacturer to fine-tune your chassis rather jumping from one manufacturer to the next is apparent here. But, if you’re comparing from brand to brand worry less about the numbers on the shock and more about what you want the suspension to do.

Roehrig Engineering’s Mike Kadlecik dynoed all of our test shocks.